skip to main | skip to sidebar

One of the things I love most to make is soup. I'm not sure what it is I like about it, but I like being so present in the process. As with all my endeavors, the most difficult part is deciding where to begin. I've solved that problem with a lovely little recipe from Alton Brown. In reality, it's probably exactly the same steps as I'd take if I'd never seen it, but its simplicity was inspirational.

On a side note, I hate those reviews where the reviewer writes, "This is an awesome recipe! I used vermouth instead of vegetable broth and my grandmother's organic marigolds to replace the broccoli. But this is completely my family's favorite recipe!" So I'm not posting his recipe here, or even a link to it.

For the curious, it's his "Garden Vegetable Soup" recipe and you should goog it because it's a great recipe. But here is mine:

2 Tbl. EVOO heated in the bottom of a dutch oven over medium heat.

Add to the hot oil approximately 1 c. scallions, white onion, or leeks (white part mostly) or even a combination of these. The goal is to use what's in the fridge. Plus a couple of garlic cloves, minced, or pre-minced garlic to equal about a tablespoon. Add a bit of salt (AB uses kosher and so do I) and cook for 7-8 minutes until they gain some transparency and soften.

Add a total of 3 cups of vegetables in a combination of ones that get a bit mushy and ones that don't. I used
1 very large russet potato, diced with a few bits of skin left on here and there
1 cup of fresh sugar snap peas
2 large carrots, sliced in rounds
Cook and stir for 4 to 5 minutes.

Add 1 quart of organic vegetable broth, increase the heat to high and simmer.  Then add 2 medium tomatoes, peeled and chopped and 1 cup of cauliflower diced to the size of a kidney bean, season with pepper (red, black or white) and cook for about 5 more minutes.

Reduce heat to low and cook until the veggies are fork-tender, about 25 minutes. Add fresh herbs, dried herbs to your taste. I like tarragon, sage, or parsley. I prefer just one at a time, but you may find a blend you like- go for it. And then do not miss this bit of AB genius, add one really good squeeze from half a lemon. Salt to taste and enjoy!

Posted by JustPeachy at 3:12 AM No comments:

Posted by JustPeachy at 2:59 AM No comments:

So-- I'm having a hard time understanding how someone (me) who doesn't really like chicken can have SO many chicken recipes on her page. Hmmm?? But this one is good, maybe great. Looks disgusting though. One 9x13 baking dish... gone in 60 seconds. (ok. not quite that fast- but there were only four of us eating it)

The inspiration for this recipe is from The Black Peppercorn, along with some really great photos that make it look A LOT BETTER than mine.

Make the buffalo sauce by melting the cream cheese in a saucepan on medium heat. Whisk in the hot sauce, and season with garlic salt. Let the sauce simmer for a few minutes and then remove from the heat and let cool.

Cut the chicken crosswise into 1/2" strips and saute until minimally cooked (it will finish cooking in the oven).
Mix the buffalo sauce with the chicken and spread it in the bottom of a 9x13 casserole dish.
Sprinkle the crumbled blue cheese on top of the buffalo chicken mixture.
Lay the Tater Tots, still frozen, lengthwise in rows, evenly on the chicken and blue cheese. One bag Trader Joe's Tater Tots is more than enough to cover the casserole dish. Sprinkle with grated cheese. I'm pretty certain I used more than a cup of cheese.
Bake in the 350F oven for 30-45 minutes. Remove from the oven and sprinkle with diced celery and green onions before serving.

*Hot Sauce- My original plan was to use FRANK'S® REDHOT® Buffalo Wings Sauce. But somewhere in the middle of my shopping excursion to TJ's I discovered I really didn't want to make another grocery stop and remembered that the Black Peppercorn recipe had you making your own. The Trader Joe's I shop at has three different types of hot sauce, jalapeno, habanero, and the chili. That was my most difficult decision. Ultimately I went with the least hot according to the scale on the side of the bottle. It was plenty of heat.

I served it with a green salad, but I think a cole slaw would have been a better contrast to the heat.

Posted by JustPeachy at 2:58 AM No comments:

I am just not doing well with the blogging for my personal sites. Maybe now that I'm in the habit and have fewer commercial "blogs" to do, I'll get back into it.
Abuela's Sopa de Pollo *
*proper spanglish, I promise. Trust your abuela.
Like most soups, Chicken Tortilla Soup is a great place to use your leftovers. Leftover tortillas, leftover chicken, even leftover tortilla chips. But working from scratch is good too.
Ingredients below include variations for spiciness and heat.

Swirl olive oil into dutch oven over medium heat. Saute onion until somewhat softened. Add garlic and chilies, saute for a minute before adding cooked chicken, salt and spices; then saute for a minute or so longer to blend flavors. Add tomatoes and broth, simmering for about 10 minutes before adding masa, cilantro, salsa and/or refried beans. Simmer until flavors have blended -15 minutes or so. Add tortilla strips or chips and simmer 5 - 10 more minutes.

Ladle soup into bowls and top with your favorites from the list below.

Posted by JustPeachy at 10:10 PM No comments: 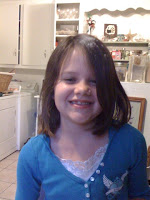 Man it's been a long time since I posted here.
I had a great time making pizza with my Peach last night!!!
When she asked if she could help, my heart did these wonderful flipflops and I couldn't stop smiling. I love playing in the kitchen with my (grand)kiddos!

Peachies Pizza Dough 1 (yeah, there are several variations on it...)

In my opinion, the best way to get a yummy pizza crust is to bake on a stone (or quarry tiles) in a very hot oven. Put the pizza stone on the rack in the middle of the oven (I usually take out the other rack) when you turn the oven on. Cold stone, cold oven. Preheat the oven temperature (and the stone) to at least 425F. This is going to take a good half an hour in most home ovens.

If you don't have a stone, use a baking sheet, keep the temperature high but don't preheat the sheet in the oven. I've tried it, and it's very hard to keep the dough from sticking if you don't grease, and burning if you do.

Sometimes the top of the crust doesn't want to get really brown before the topping ingredients need to come out of the oven. If you find you have a problem with that, brushing with olive oil before baking may be helpful.
Have fun!
Posted by JustPeachy at 8:35 AM No comments:

I don't know how this economy is going for you, but things are a little tight out here on the west coast. One of the first things we did to tighten our belts was to cook in a lot more often. Judging from the blogs I follow, most of you are doing the same thing too.
The next thing we did was to start baking, rather than buying, nearly all our bread. It's been SO much fun. We do it the lazy way, using the bread machine to work the dough and the oven to bake it. The Hamilton Beach breadmaker I was blessed to inherit from my sister does a good job mixing, kneading, and raising the dough, but is horrible for baking in.
Finally- I've become a refrigerator tyrant. We try really hard to use it all-- leftovers, scraps, whatever's in the fridge is game (sometimes almost literally ;-) for the next meal. So far, mostly good... a few failures, which I'm choosing to call lessons, have occurred, but by and large it's made me a much more creative and confident cook.
We utilize pasta about twice as much as we did before; which is to say almost daily. Yesterday at lunch I made a One-dish (one skillet in this case) with Lemon Pappardelle and canned tuna from Trader Joe's.

Pappardelle and Tuna --- Quick and Yummy

Cook the Pappardelle according to package direction, or make your own (Check out the video on Food2- www.food2.com - with Adam Roberts!)

Meanwhile, drain two cans of Trader Joe's albacore tuna in olive oil and reserve about 2 Tbl to heat in a skillet. Enter chopped fresh onion and fresh garlic chopped to the skillet to taste. (no- I'm sorry, I can't tell you how much. I don't know what your kids will eat or, most importantly, what you've got in the pantry, which is what this is about). After sauteing for a bit, I added some
roasted red pepper also from TJ's and a can of their artichoke hearts, drained (not marinated) to heat with the onion and garlic for a minute or so. I added about a tablespoon of lemon juice and, the tuna, after giving it a quick dice. Add freshly ground black pepper (in this instance, it was a blend of white and black) and one lemon sliced and put a lid on the skillet for a couple of minutes whilst the pasta drains.
Pasta in a bowl, the contents of the skillet on the pasta, a bit of grated parmesan or.... a bit of lemon zest and --- yum!
Hugs!
Posted by JustPeachy at 2:17 PM No comments:

In Wine there is Wisdom...

Started my Sunday morning with a forwarded email message. I don't like forwarded messages, and I rarely read them. But, in this case, the sender was someone who rarely does that, and he personalized the subject line (in a very flattering way, no less), so I bit.
Here's the message...

"In wine there is wisdom, in beer there is freedom, in water there is bacteria."

In a number of carefully controlled trials, scientists have demonstrated that if we drink 1 liter of water each day, at the end of the year we would have absorbed more than 1 kilo of Escherichia coli, (E. coli) - bacteria found in feces.

In other words, we are consuming 1 kilo of poop. However, we do NOT run that risk when drinking wine and beer (or tequila, rum, whiskey or other liquor) because alcohol has to go through a purification process of boiling, filtering or fermenting.

Therefore, it is better to drink wine and talk stupid, than to drink water and be full of shit. There is no need to thank me for this valuable information.

Happy Sunday!!!
Posted by JustPeachy at 11:21 AM No comments: 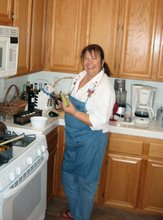 JustPeachy
West Coast, United States
I'm a 60-something artist, writer, momma (x5), grandmama (x6) and count my kids among my closest friends. With my daughters, I've spent the last six years as caregiver for my mother as she made the long descent into Alzheimer's hell. But she's free now, in heaven with many loved ones, and I'm free to create my own heaven or hell here on earth. Aiming for the first one! My goal for the next 30 or so years of my life is to understand God and His purpose for my time here. I want to love more deeply, live more purposefully, and fear less.